SECRETS UNEARTHED IN NEW PAPERBACK EDITION OF STOLEN LEGACY:
NAZI THEFT AND THE QUEST FOR JUSTICE AT KRAUSENSTRASSE 17/18, BERLIN

Washington, DC, Nov. 28, 2016 — In 1990, shortly after the fall of the Berlin Wall, Dina Gold marched into a German government ministry at Krausenstrasse 17/18 and declared, “I’ve come to
claim my family’s building.” And so began Gold’s legal struggle as recounted in STOLEN LEGACY: Nazi Theft and The Quest for Justice at Krausenstrasse 17/18, Berlin, the first book about the successful claim of a building seized by the Nazis. 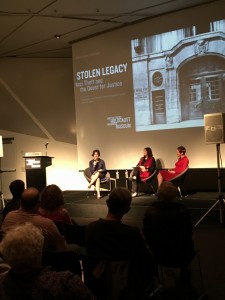 The event had been so widely advertised that the hall was jam packed. A queue formed for late-comers wanting to be squeezed in.  Again there were plenty of questions from the most attentive audience. So much so that we overran our allotted one hour time slot – and then conversations continued during the reception held in the foyer.

People really appreciate the information given about how they can use the US Holocaust Memorial Museum’s resources to find out about their own family history. 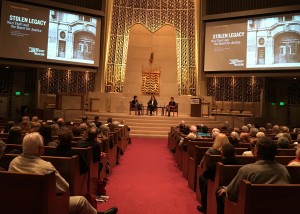 A wonderful time this evening in Seattle at the magnificent Temple De Hirsch Sinai talking about Stolen Legacy to a most attentive, and very large, audience!

With me were US Holocaust Memorial Museum expert historians Dr. Edna Friedberg and Dr. Suzanne Brown-Fleming.

The topic of restitution and recovered heritage clearly of great interest – there were many questions on how people can follow my example and pursue their lost past. 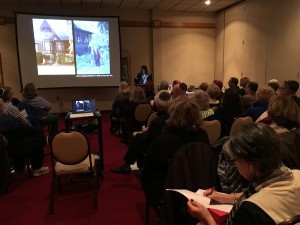 What a great community at Har Zion in Philadelphia. Last night there was a packed room for an event to mark the 78th anniversary of Kristallnacht.  As I told the story of Stolen Legacy, everyone was listening very attentively and then asked many excellent questions.

I am always pleased to meet people I can give helpful advice to and this evening was one such occasion. There was great interest in finding out about lost relatives, so I was able to point towards the USHMM (United States Holocaust Memorial Museum) and ITS (International Tracing Service) as having excellent resources to help those on a quest to discover their history. 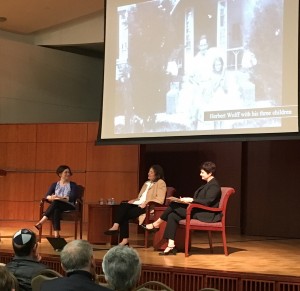 This evening I was on stage at an event organized by the US Holocaust Memorial Museum at Chizuk Amuno Congregation, Pikesville, Maryland.  Two USHMM experts were on stage with me –  historian Dr. Edna Friedberg, (on my right) and Dr. Elizabeth Anthony, ITS and Partnerships Program Manager, Visiting Scholar Programs.

We talked about the pursuit of justice and restitution as well as how people can piece together their own family history, just as I did, with the discovery of documents held in archives. And, of course, we discussed the story of “Stolen Legacy.”