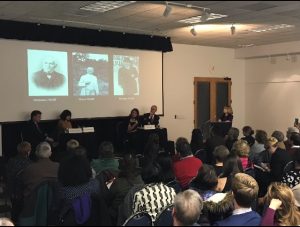 Atlanta, GA.   Speaking this evening on a panel at the launch of the Georgia Commission on the Holocaust’s traveling exhibit “Fashioning a Nation: German Identity and Industry, 1914-1945.”  This new exhibition explores the powerful history of German fashion from its international impact to its destruction by the Nazi regime. It honors the legacy of the Jewish Germans who contributed to its rise and commemorates the great cultural and economic loss resulting from its demise.  The exhibition will be on display at the Goethe-Centrum, Plaza Level of Colony Square Mall, Atlanta from January 9 – 23, 2017 and then moves on to the Georgia Commission on the Holocaust’s permanent exhibit Anne Frank in the World: 1929-1945 in Sandy Springs.