I spoke at Temple Sinai’s annual Authors’ Roundtable alongside Morra Aarons-Mele, Hiding in the Bathroom: An Introvert’s Roadmap to Getting Out There (When You’d Rather Stay Home); Anna Solomon: Leaving Lucy Pear; and Alexandra Zapruder: Twenty-Six Seconds: A Personal History of the Zapruder Film.

We spent an hour together on stage being interviewed by Lynn Sweet, Washington Bureau Chief for the Chicago Sun-Times, and then broke off into individual rooms where we were joined by members of the audience wanting to hear more about our books.  I had prepared a powerpoint presentation to show the crowd in my room while they ate their lunch and then took questions and was whisked away to sign books. 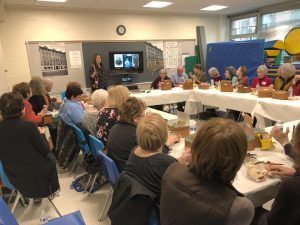 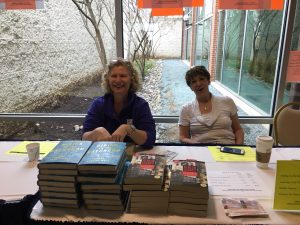 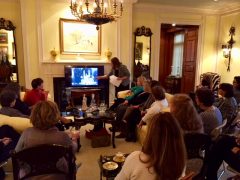 Today I presented the story of “Stolen Legacy” to a book club held in a lovely home in Potomac.

Here I am showing the audience powerpoint photos and pointing out who the various people are and their significance in the story.

Attendees had their own restitution stories to tell the group. One related her family’s experience reclaiming two properties in Krakow, Poland. Another told of her father’s long lost property in Ukraine – with precious little hope of ever regaining it. 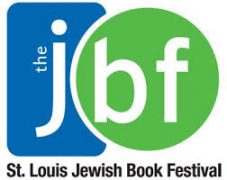 I was invited to speak at the 39th St. Louis Jewish Book Festival, one of the largest in the country with over 10,000 audience members.

My event, in partnership with the Holocaust Museum and Learning Center,  was in commemoration of the 79th anniversary of Kristallnacht.

I really enjoyed meeting the enthusiastic volunteers in the bookstore, which I visited before going on stage.  Great to learn that all contributors’ books are on sale for the duration of the Festival!

It was a packed auditorium, with 275 people listening intently to the Stolen Legacy story.

What a great atmosphere!

Up on stage with Nick Allard, President, Joseph Crea Dean and Professor of Law at BLS, talking to alumni and invited guests about Stolen Legacy.

The Law School, with graduates practicing in 49 states, Washington D.C., and 37 countries, hosts events across the United States in order to connect with alumni.

There were many questions about the legal position regarding property restitution in former East Germany, Poland, Belarus and even a query from someone who had fled Iraq decades ago and would like to reclaim his long lost family buildings.

Talking about “Stolen Legacy” at the Mandel JCC in Boynton Beach on October 30. This was the second event in Florida for The Gross Family Center for the Study of Anti-Semitism and the Holocaust.

Once again, it was such a full house that additional seating had to be carried in so that that everyone could be accommodated.  And there were plenty of questions for me to answer.