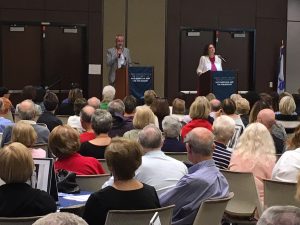 It was a full house today for the event entitled “The Destruction of the Jewish German Fashion Industry” presented by me alongside journalist and author Uwe Westphal – who had been flown in from Berlin.  Our lecture was part of The Gross Family Center for the Study of Antisemitism and the Holocaust 2018-2019 Speaker Series.

The talk was introduced by Annette Klein, German Consul General for Florida, Puerto Rico and the US Virgin Islands. Based in Miami she had come especially in order to speak to the large audience of  376 people in the tightly packed hall. 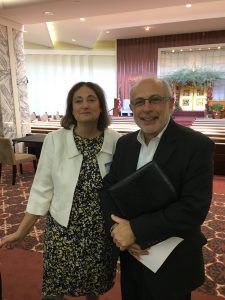 Each author spoke for half an hour about their books and then  answered questions from both the audience as well as the delightful moderator Robert Siegel. 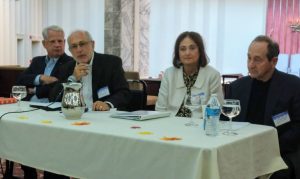 I was the guest speaker at Congregation Beth Shalom in Naperville, Il which was hosting the 2018 Jewish United Fund Annual Campaign.  The JUF of Metropolitan Chicago impacts every aspect of local and global Jewish life, providing human services for Jews and others in need, creating Jewish experiences and strengthening Jewish community connections.

Brunch was held in the Social Hall, followed by a Holocaust Remembrance service in the Sanctuary.  My presentation was next.

The audience was boosted by the attendance of the cheder pupils. They were remarkably attentive and then proceeded to ask me questions – gratifyingly intelligent ones at that! 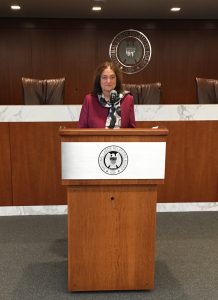 I spoke at the National Labor Relations Board for a program organized by the Equal Employment Opportunity Commission. 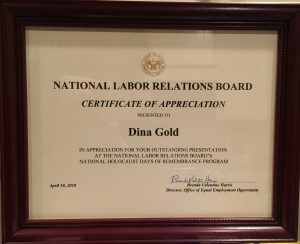 The event was part of the Federal government’s annual Holocaust Days of Remembrance.

And I was given a certificate to mark the occasion. 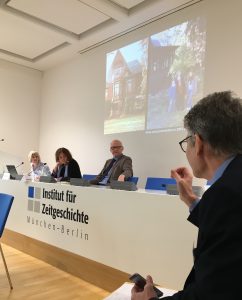